This October we're focusing on learning about some of our #SpookySpecies so we can learn to love, not loathe them...

There are around 40000 different species of spider

Spiders are found on every continent except Antarctica

The world’s smallest spider is the Patu marplesi. It is so small that 10 of them could fit on the end of a pencil

The world’s biggest spider is the goliath spider (Theraphosa blondi). It can grow up to 11 inches wide, and its fangs are up to one inch long. It hunts frogs, lizards, mice, and even small snakes and young birds

Arachnophobia is the fear of the spiders. It is one of the most common phobias in North America and Europe. Arachnophobia is less common in tropical places where there are more large, hairy spiders

Spider silk is amazingly lightweight: a strand of silk long enough to go all the way around the Earth would weigh less than 500 grams - that's the same as a bag of sugar! It's also as strong as Kevlar, the material used to make bulletproof vests.

The silk that comes out of the spider’s spinneret is liquid, but it hardens as soon as it comes in contact with air. Some spiders have up to seven types of silk glands, each creating a different type of silk—such as smooth, sticky, dry, or stretchy

Hundreds of years ago, people put spider webs on their wounds because they believed it would help stop the bleeding. Scientists now know that the silk contains vitamin K, which helps reduce bleeding

The Garden orb spider is the most recorded spider across Birmingham and the Black Country. Look for a greyish-brown spider with a white cross on its back, spinning its famous spiral webs.

A web is sticky because of glue droplets the spider deposits on it. These droplets are three times thinner than the diameter of a single hair. Scientists describe these droplets as being similar to chewing gum: they just keep stretching and stretching

With thanks to https://www.factretriever.com/ for additional facts

EcoRecord is the biological record centre for Birmingham and the Black Country.
EcoRecord collects, collates and makes available… 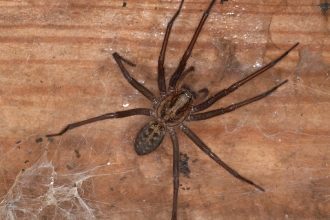 The giant house spider is one of our fastest invertebrates, running up to half a metre per second. This large, brown spider spins sheet-… 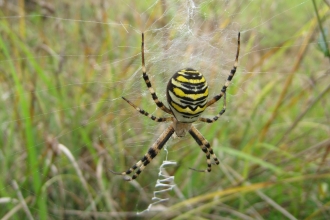 The wasp spider is a great mimic - looking just like a common wasp keeps it safe from predators, even though it is not dangerous itself…

In our Spring 2020 member magazine we interviewed The Mayor of Dudley, Councillor David Stanley about his passion for wildlife and why…

INSECT APOCALYPSE - WILL YOU TAKE ACTION FOR INSECTS PLEDGE?

Dr Delia Garratt joins the Wildlife Trust for Birmingham and the Black Country from the Shakespeare Birthplace Trust, where she was…